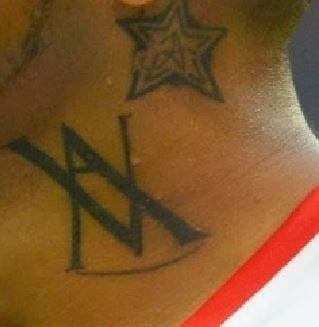 The Chilean national football team player, Arturo Vidal, is being sued by the “Hueso Santo” advertising agency because, according to their claim, one of the player’s tattoos is based on a logo they created.

For this reason, the above-mentioned advertising agency filed its complaint before the National Institute of Industrial Property (INAPI), alleging that the player, who has the tattoo on his neck, “would have inappropriately appropriated a design and a trademark that does not belong to him.” The company also said that it will also file a criminal complaint for infringement based on the Copyright Law, which establishes a fine amounting to a large sum.

The company explained that in May 2014 it created and registered the “AV” logo and the “King Arturo” brand, which were presented to Vidal’s representatives, Twenty Two, but no agreement was reached.  Hueso Santo’s lawyer, Felipe Schuster, indicated that “we will demonstrate the bad intentions of Vidal’s representatives and of the player himself when he took the logo that he did not own and used it.  The same logo from 2014, is a logo that was not created by him, but by one of my clients, without any type of authorization or prior license.”

The next step is to wait for the decision of the Chilean Trademark Office or the Chilean court. This case and the interesting grounds that may arise around it will be closely watched.  One thing is clear: When it comes to tattooing, people will now have to think twice what image or phrase to use as they could end up receiving a lawsuit.

Deferment of publication of patent applications for up to 18 months counted as from the filing date of the priority application!